Another great article from No Dog About it Blog, again talking about playing at the dog park – red alert behaviours and why dogs need to be supervised, when off lead.

Same can be said if your dog goes to a doggie daycare or boarding kennels. If dogs are running free in groups, they need to have someone watching 100% of the time to watch out for, changes in behaviour, such as over excitement, stress, bullying and aggression.

No Dog About It Blog 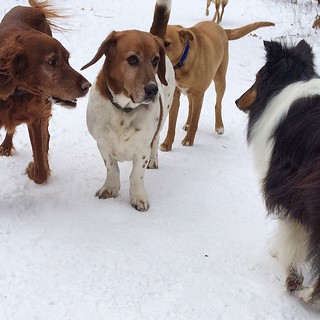 This past weekend I had the opportunity to attend a two-day workshop on dog interactions, dog behavior, aggression and behavior management. One session focused on behaviors often seen at dog parks and doggy daycares. It was eye-opening, mind-expanding and thought-provoking.

One of the key learnings I took away from the seminar had to do with what we often like to think of as “playing” at the dog park. (Hint: Most of what we see at the dog park is not playing.)

When we think of dogs playing, what do we often see them doing? Chasing?  Wrestling? Playing tug? Probably all of those right? But what are we missing?

If you’ve watched any of Sue Sternberg‘s dog park videos, probably a lot. Dogs are always communicating with one another, whether it be before, during or after their interactions with one another. What we consider “play” at the dog park is often not play, but something else, something…

Posted by Zerobites Dog Training on September 4, 2015 in About

Random musings of a reckless soul.

The Blog of Dimi
Table 41: A Novel by Joseph Suglia
My Botanical Garden

Anything and Everything, but mostly Poetry

Travel, Fitness, Northern. Three of the finer things in life! Join me in exploring the globe and telling a funny story along the way with a little piggy

Vegan-Friendly Stories for all ages